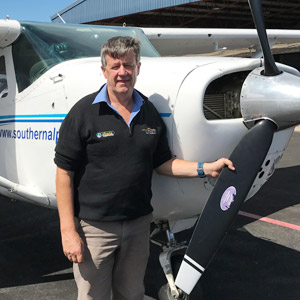 Paul was born and schooled in Wanaka and has spent much of his life either here or close by ever since. He has been flying from Wanaka and Makarora for over 30 years , has been CEO of Southern Alps Air for 20+ years and is still captivated by the spectacular landscape he fly’s through year round.

If he’s not flying you’ll probably find him mountain biking one of Wanaka’s many trails or planning his next hunting or fishing trip.

Anne has been involved in Tourism most of her working life with Paul and her having worked together in the aviation sector since Paul gained his commercial pilot licence in the mid 1980’s,  raising 3 gorgeous children along the way. The best part of being involved in the business for Anne is seeing the delight on the client’s faces and listening to the excited chatter when they return from their scenic adventure.

Originally from Southland, Anne grew up on a farm in a family of 6 children. She enjoys hiking, exploring different places, flying (as a passenger, not a pilot), being at home with their animals and spending time with family and friends.

Will grew up on a farm in Otago

and after working in the agricultural industry he moved to Christchurch to complete his commercial pilot training.

After moving to Wanaka he started working as a commercial pilot flying whitebait from the West Coast and flying people to Milford Sound.

Outside flying Will enjoys hunting and spending time with friends. 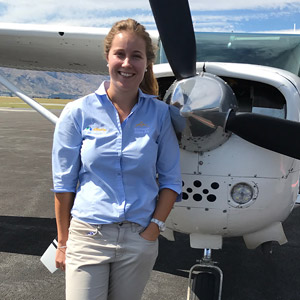 Growing up on a farm in the deep south of New Zealand, aviation has always been Bayleigh’s passion. Inspired to one day become a pilot by her grandfather and cousin, she graduated from aviation college with a Diploma in General Aviation.

In her spare time she enjoys biking, yoga and spending time with family and friends.

Raised in Wellington he moved to Canterbury and after working in different roles outside aviation he completed his commercial pilot training in Christchurch. He started his flying career instructing in Wanaka and has now transitioned to commercial flying.

Outside flying he enjoys mountain biking and exploring the Central Otago outdoors.